The film Paul, Apostle of Christ, is unlike some recent Bible films that retell the story from scripture. This film creates a fictional story of the Gospel writer Luke (played by Jim Caviezel), who seeks out the apostle Paul (played by James Faulkner) in prison in Rome, to collect stories for the Acts of the Apostle.

All of the story of the film is set in Rome, with Luke going back and forth from visits to Paul in prison, to visits with the Christian community hiding in Rome, led by the Biblical personalities Aquila and Priscilla. Thus, it is a slow-moving plot. However, it uses these scenes to show the violent persecution of Christians by Emperor Nero, and for Paul to flash back to memories of his own persecution of Christians before coming to the faith. The Roman commander of the prison who has a sick daughter becomes involved in the fictional storyline, which serves to further illustrate the Christian faith and martyrdom of Paul.

While the plot moves slowly, this film is not so much about the plot as it is about the characters and what they experienced, and the characters are developed well, helping you feel the emotion and real struggles of trying to have faith in God in a dark and evil world. Faulkner is very convincing as Paul. Aquila and Priscilla also portray a Christian married couple who show respect and love for each other. The acting, costumes, scenery, music and cinematography are outstanding.

Although most of the film is fictional, it seeks to carefully follow what is known from the Bible. For example, the film shows Luke making sure a letter is delivered from Paul to Timothy, and quotes extensively from Paul’s Second Letter to Timothy. A study of the last part of that letter mentioned “Only Luke is with me” (2 Timothy 4:11) and sends greetings to Priscilla and Aquila (2 Timothy 4:19), whom the film depicts as escaping Rome to be with Timothy.

Especially powerful is how the film deals with Paul’s inner struggle with guilt over killing Christians, yet accepting Christ’s grace and forgiveness. This is beautifully resolved at the end of the movie in a particularly moving scene. The film should spark great discussions about what it is like to live out the faith in a non-Christian world.

Movie review: “I Can Only Imagine” 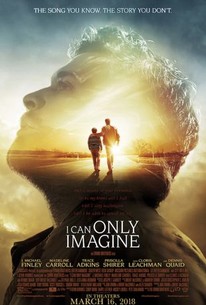 My wife and I were deeply moved by the new film, I Can Only Imagine. I was so emotional that I had to compose myself before I could drive home– it was that powerful.
You may know the song, but do you know the story behind the song? “I Can Only Imagine” by Bart Millard of the Christian band Mercy Me is the best-selling, most-played Christian single of all time. The new film by the same title tells the moving true story of the songwriter and how he wrote the song.
The film tells how Bart Millard’s father abused him and his mother, and constantly told Bart he was not good enough. [Spoiler alert—skip the rest of this paragraph if you don’t want to know the basic plot.] Thanks to a football injury and a music teacher’s insistence, Bart discovered he had a gift to sing. When his father told him to forget his dreams, he left home, turned his back on the girlfriend who loved him, and tried to escape his troubles by singing with a traveling band.
I won’t give away the ending, because the circumstances of how he recorded the song have surprising twists and turns along the way, but suffice to say that Bart had to face his fears to reach his dreams. And yes, the film dramatically presents the full song near the end of the film.
Dennis Quaid is amazing as the actor playing Bart’s abusive father. People who have endured abuse will feel the pain Bart feels from his father, but many people with sins in their own past, like myself, will identify with the pain of the father himself.
This is a Christian film, but it is not “preachy.” The story is raw, real and unapologetically soaked with the hope of the gospel. Go see this film if you like music, if you like romance, if your dreams have been crushed, if you have been abused, if you have abused someone, if you have a broken home, if you are grieving the death of a loved one, if you need forgiveness, if you need to forgive, and if you need hope.

A lot of Christian films have poor acting and predictable scripts, so I was quite surprised at how good this movie was. Of course, it was predictable in defending the belief in God, but it presented that message in a way that was creative and hip. The film introduced a variety of characters but did not show how they all connect until later in the film, giving the subplots an unpredictability, even as the main plot was fairly much what the viewer expected. It targeted a young audience, as the protagonist and most of the primary actors were young adults who constantly used smart phones, computers, and visual media to communicate, and it all came to a conclusion during a Christian rock concert.

The acting was outstanding, both by the lead characters and the supporting roles. It was some of the best acting that I’ve seen in a Christian film. The dramatic tension made a very intellectual argument interesting, bringing it to a climax that was so strong that the theater audience where I was broke out into loud applause. Atheists will hate this film, but they cannot dismiss it as simple-minded or shallow. But what might infuriate atheists the most was that the movie showed that it is not only reasonable to be a believer, but it can even be cool to be a believer.

(If you see a video ad below this post, please understand that I have no control over these ads, and that I do not necessarily endorse the product.)

Is your worldview from Hollywood or the Bible?

Is your worldview more in line with Hollywood or the Bible?
Let’s take four popular Hollywood movies as an example. Titanic, The Avengers, The Hunger Games, Inception. Do you have any idea if these movies have a Christian worldview? If you live by the view of life in these movies, will you build on a rock or just blow in the wind?
So how can we avoid being blown by the wind of popular opinion? How can we build a solid foundation for our lives?
Jesus said to build on the rock in the Sermon on the Mount (Matthew 7:24-27). He was referring to Himself and His teachings. Notice how this can give you a solid foundation for life.
There are four main components to a coherent worldview: what you believe about God, mankind, ethics and reality.

1) God. In the movie The Avengers, Black Widow tells Captain America that Thor and Loki are “basically gods.” Even so, Cap adds something else. “There’s only one God,” he tells her, “and I’m pretty sure He doesn’t dress like that.”
The Bible teaches God is the Creator. Genesis 1:1 says that in the beginning, God created. It also teaches that there is one God, but He is revealed in three persons: Father, Son and Holy Spirit. So when characters on Star Wars say “may the force be with you,” Christians know the true “force” is God.
But there are many religions that believe in God. The Christian belief about God provides the answer for the other three major components of a coherent worldview, and they all fit together, like pieces of a puzzle.

2) Mankind. In the movie The Hunger Games, Katniss understands that life has great value, and she is willing to sacrifice her own life to save others. The Bible says something good and something bad and something that is potentially great about mankind. The good thing is that we are made in the image of God. The bad thing is that we are all sinners. The great thing is that through faith in Jesus Christ, we can be forgiven of sin, and have eternal life. Why? Because Jesus made the ultimate sacrifice for us by paying for our sin through His death on the cross.

3) Ethics. In the movie Titanic, Jack is having a sexual romp with Rose and says, “This is crazy; it doesn’t make any sense,” She responds, “I know, that’s why I trust it.” That kind of thinking will sink you about as fast as the iceberg. It’s sinking thinking! A coherent worldview needs to have a foundation for ethics. Philosophers like Plato and Aristotle said to do the right thing and do the reasonable thing, but how can we know what that is? That is

why we need a standard to live by, and because we believe in God, we have that standard. The Bible says gives us the Ten Commandments and many other moral teachings, but it also gives us the power to live a godly life. Somebody might say that other religions like Islam also believe in God and have a holy book with a standard of living. That is true. But other religions do not have the same motivation for ethics that Christianity has. Other religions seek to motivate good ethics by guilt, but Christianity motivates by grace. Titus 2:11-12 says, “For the grace of God that brings salvation has appeared to all men. It (grace) teaches us to say “No” to ungodliness and worldly passions…” We have the motivation of grace, and we also have the power of the Holy Spirit, as every believer is indwelled by the Spirit, so as we live by the Spirit, we are able to live ethical lives (Romans 8:4), producing the fruit of the Spirit (Galatians 5:22-23).

4) Reality. In the movie Inception, characters living in a dream within a dream within a dream. They are not even sure what reality is, whether this world is real, and whether this life is worth living. The Bible teaches that this life is very real, and that the ultimate reality is found in eternal life in heaven through faith in Jesus Christ. The purpose of life is to know Christ and share Him with oth

ers, that we may please God and experience the reward of eternal life in heaven.
Do you see how all of this fits together? If we believe in the God of the Bible, then all of the pieces of the puzzle fit together. God is the source of all truth. All of this truth is found in the Bible. A Christian who does not know his or her Bible is like a cowboy with no bullets in his gun. He may look good, but in battle, he’s useless.
If an entertainer on Dancing with the Stars says that God is in her shoes, will you know your Bible well enough to know that God is separate from us and beyond us? If you go to see a movie like Clint Eastwood’s Million Dollar Baby and see the hero killing the heroine so that she won’t have to live the rest of her life as an invalid, will you know your Bible well enough to know that all life is sacred and valued by God, and that it is wrong for us to take a human life just because that life is sick or handicapped?
First Peter 3:15 (HCSB) says, “Always be ready to give a defense to anyone who asks you for the reason for the hope that is in you.” The word translated “defense” is the Greek word apologia, from which we get apologetics, defending the faith.
So know what you believe, and be ready to defend it. Don’t let Hollywood do your thinking for you.