Houses of worship: Church of the Holy Family, Columbus, Georgia

I continue my series of photo blogs of houses of worship that I like with a Roman Catholic church. The Church of the Holy Family is a traditional Catholic sanctuary located in downtown Columbus, Georgia. It caught my eye as a majestic example of modern church architecture in the Gothic style, so popular in Europe and among Catholic churches. 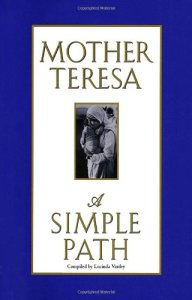 I was asked to read Mother Teresa: A Simple Path, to see if it should be placed in our church library. I am recommending that we do put it in the library because of its positive elements and for the Christian reader to be informed about her historical work, but with a statement of caution in the flyleaf. Why is that?

Mother Teresa is well known for her work with “the poorest of the poor” in Calcutta, India and around the world, for which she received the Nobel Peace Prize in 1979. This book is a collection of thoughts by Mother Teresa and her followers on her philosophy of life and ministry. This path is summed up on page 1 of the book this way: “The fruit of silence is prayer, the fruit of prayer is faith, the fruit of faith is love, the fruit of love is service, and the fruit of service is peace.”

The book is inspiring in its devotion to love the poor by loving Jesus Christ through the poor. There are many inspiring testimonies from volunteers, prayers, and simple statements that show how she kept her focus on her mission. She had a wonderful appreciation for the value of every human life, including the unborn. On p. 55 she asks why people worry about children being killed in wars but do not oppose mothers killing their own children.

I hesitate to say anything critical about Mother Teresa, because she has done far more for the needy in the name of Jesus than I have. However, I must point out that while she was a devoted follower of Christ, she encouraged people to follow whatever religion they were in, rather than convert to Christianity. For example, on p. 31 she says, “I’ve always said we should help a Hindu become a better Hindu, a Muslim become a better Muslim, a Catholic become a better Catholic.” This same philosophy is found throughout her book:
“I have never found a problem with people from different religions praying together. What I have found is that people are just hungry for God, and be they Christian or Muslim we invite them to pray with us…”
“God is not separate from the Church as He is everywhere and in everything and we are all His children– Hindu, Muslim, or Christian…”
“Anyone is capable of going to Heaven…” In this passage, she does not clarify that going to Heaven is by faith in Christ.
(Mother Teresa, A Simple Path, p. 31-32, 59, 73.)
Mother Teresa says that she is saved through Jesus, but she believed that Muslims and Hindus can be saved through Jesus, while remaining Muslims and Hindus.
This contradicts the words of Jesus, who said He was the only way to the Father (John 14:6), and the words of the apostle Paul, who said that there is salvation in no other name than the name of Jesus (Acts 4:12). We should not be surprised that Mother Teresa takes this viewpoint, as Roman Catholic theology generally teaches that the cross of Jesus Christ saves people who follow their own consciences and own religions, even if they never declare faith in Christ. (See statement by Pope John Paul II in Pontifical Council for Interreligious Dialogue – Congregation for the Evangelization of Peoples, Instruction Dialogue and Proclamation, 19 May 1991, n. 29; L’Osservatore Romano English edition, 1 July 1991, p. III; and Catechism #841.)

Mother Teresa’s work is truly inspiring and deserving of recognition. However, her teaching about salvation sadly follows the typical Roman Catholic viewpoint of salvation, a viewpoint that falls short of the teachings of the Bible. Let us be inspired by Mother Teresa’s devotion, but cautious of her as a theologian.