It wasn’t quite so simple as that, but Dad had the basic story right. Now this little-known (but well-known in south Mississippi) and strange piece of Civil War history is on the big screen, in Free State of Jones.

My wife and I saw the film in Hattiesburg, Mississippi, which is in the county immediately south of Jones. The theater was packed for an afternoon matinee, as people are fascinated by a film about local history. Some people personally knew minor actors in the film. Behind us, someone whispered in a swamp scene, “That must be the Okatoma.”

What they saw was an mostly accurate, violent film about the stubborn, tragic character of Newton Knight, who led a band of escaped slaves and poor white deserters, at times numbering in the hundreds, that literally took control of Jones, Jasper and part of Smith Counties in south Mississippi late in the Civil War, and rebelled against the Confederacy.

(Above: Newt Knight, played by Matthew McConaughey, leads his band of rebels.)

Why did they do it? Jones County had the lowest percentage of slaves in the state of Mississippi. A law passed during the war allowed whites who owned 20 or more slaves to be exempt from fighting. Poor white farmers in south Mississippi had no interest in the war and resented being forced to fight. As Newt Knight famously said, “This is a rich man’s war and a poor man’s fight.”

Notice that I said the film is mostly accurate. There are some dramatized scenes based on the true story, of details that we cannot know, such as some of the interactions between Newt Knight, his wife Serena, and his common-law African-American wife, Rachel. Also, the film takes major liberties with Newt’s killing of the Confederate officer who was trying to capture Knight. The movie invents a dramatic scene involving an ambush at a funeral and shows Newt killing the officer in a church. The historical records indicate that what really happened was that Newt hunted down Major Amos McLemore at the Deason home in Ellisville, killed the colonel in the house, and then fled. This scene is the only major departure from the historical record that I saw in the film, and even though the film took liberty with the events for the sake of drama, at least got it right that Knight hunted down and killed the man who was trying to capture him.

Matthew McConaughey’s portrayal of Newt Knight is convincing, as is all of the acting. The costumes and cinematography are realistic and gripping. Little details are correct, such as names of places, and the correct Mississippi flag of that era. The plot appears to reach a climax of victory and then it feels like an alligator painfully dragging you into the swamp. That is because this is not fiction, this is history. History doesn’t always fit into neat plots with satisfying endings. But the adage applies here: truth is stranger than fiction. 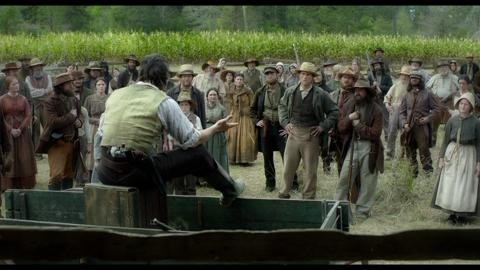