← Guest blog: “Remembering your loved ones at Christmas”
What really matters → 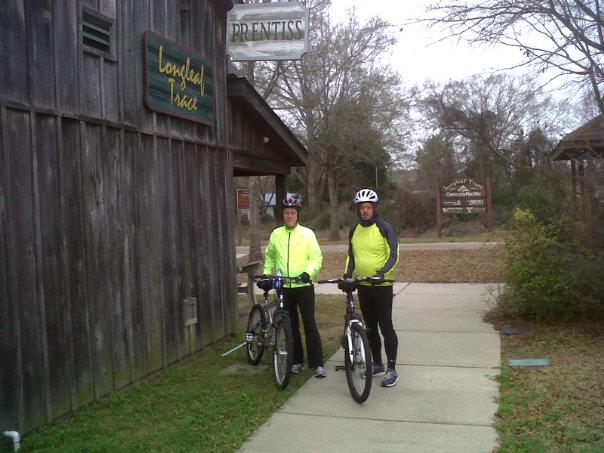 Five years ago I started riding a mountain bike a few miles in the morning to work out at the YMCA. I figured with gasoline at $4.00 a gallon, I could pay for the bicycle in gas saved and be exercising while riding. Soon I was addicted to cycling, and started riding longer distances on Saturdays for fun. When I got up to nearly 20 miles, serious cyclists told me I should upgrade to a road bike, and I was blessed to receive one on permanent loan from a friend. Soon I was riding 30 and 40 miles on the weekends on the road bike, which is a lot easier and more fun to ride, with its light weight and narrow tires.
Then my brother, who lives in Louisiana, got into cycling. We decided that we would ride the 41-mile Longleaf Trace (near our parent’s home in Hattiesburg, Mississippi) over the Christmas holidays. Since I had been cycling a lot longer than Todd, I was sharing my expertise with him and comparing notes on Facebook and in phone calls. Soon he was riding 40 miles each weekend. I got up to 52 miles on my longest ride.

The idea was to ride in each other’s draft, taking turns leading one another. I led the first seven miles, with Todd right behind me in my draft. It was largely uphill, and then we took a break. I felt fine, but Todd said my pace seemed slow. He led the next 12 miles. Forget about staying in his draft, after about 5 miles, it was killing me to keep up with him. I had to make a decision: was I going to be in pain trying to keep up his pace, or just enjoy the ride? I decided to enjoy the ride and soon he was half a football field ahead of me, constantly looking back. After the next stop, I was feeling humiliated. I had to put the bicycle in a low gear to handle the slightest uphill slopes, while Todd started meandering on the path, over to the left and then to the right, just to slow himself down and keep from going over the horizon out of my view. Then he started telling me that he needed to reset his music on his mp3 player, and told me to go on ahead and he would catch up. Soon he was flying past me. I felt like the little engine that could, but I wasn’t so sure that I could. The last 10 miles were pure pain and determination. I think I saw a turtle pass me. After five hours and 41 miles on the trail, I finally crossed the line, muttering that I HATE mountain bikes. My brother was circling around the parking lot waiting for me, saying he could go another 5 miles. But I couldn’t be mad at him, because he was trying to be nice about it the whole time, thanking me for riding with him and saying how much fun we had. That evening he went out to a movie. I took ibuprofen and rubbed my sore thighs and knees at home.
The experience reminds me of the way we often see ourselves spiritually. We think we are really good people. We compare ourselves with others, and we look pretty good. But the Bible says, “All have sinned and fall short of the glory of God.” (Romans 3:23) When we compare ourselves with God, He runs circles around us, and leaves us in the dust. It’s an humbling realization, but an important lesson for us to learn.
That long ride on mountain bikes with my brother taught me that I’m not nearly as great a cyclist as I think I am, and also encouraged me to keep on training. Getting a glimpse of God’s glory should teach us a similar lesson: we aren’t nearly as holy and good as we think we are, but we have a loving God who is waiting on us up ahead, accepting us for who we are encouraging us to do better.
However, there is also a difference. My brother can do nothing to help me, except give encouragement. My God can give me power to do what I cannot do myself. “I can do all things through Christ who strengthens me.” (Philippians 4:13)
I’m looking forward to the ride with God in 2013.

UPDATE: When I got back to Georgia, I noticed that my rear tire was lose and rubbing against the rim, so I took it to my bike repairman. He said the bearings were shot, and he said, “I don’t know how you even finished 41 miles with a wheel in that bad shape.” Soooooo…. maybe, just maybe, I wasn’t in as bad a shape as I thought! Looks like I need to challenge Todd to another ride on the Longleaf Trace!

← Guest blog: “Remembering your loved ones at Christmas”
What really matters →