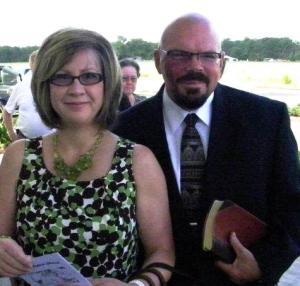 (In the guest blog below, Bobby Braswell reminds Christians of some important truths we need to hear, regarding the re-election of President Obama. Rev. Braswell is the associational missionary of Middle Baptist Association in Sylvania, Georgia, where he ministers to pastors and churches in Screven County, Jenkins County and northern Effingham County. Bobby his wife Frankie (pictured with him here) live in Guyton, Georgia. They have two children: Emma, 22, and J.B., 20. You can read his blog at www.brotherbobbysblog.blogspot.com.)

Watching the returns and waiting to see who will become the next president is about as compelling as TV viewing gets. It’s no secret that millions of Christians went to bed with sour stomachs last night. Many, though I am sure not all, who would identify themselves as social conservatives and followers of Jesus were outspoken in our hopes that the incumbent president would have a new career beginning in January. Since that didn’t happen, what are some appropriate responses to a second term for Barrack Obama?

Pray for the president – 1 Timothy 2:1-2 (NKJV) 1 Therefore I exhort first of all that supplications, prayers, intercessions, and giving of thanks be made for all men, 2 for kings and all who are in authority, that we may lead a quiet and peaceable life in all godliness and reverence.

Preach the Gospel – A concern I have had for some time is that a lot of Christians behave as though getting the “right person” elected is THE ANSWER for America. Hello! It’s not! It never was! God changes people from the inside out. He changes the heart. I am not aware of anything that the government can do that can bring spiritual regeneration to people. Only the Gospel of Jesus Christ can do that (Titus 3:5). People who have experienced the grace of God through Jesus Christ can be a powerful force for transforming North American culture by radical obediennce to the Great Commission (Matthew 28:18-20). That is really the only way that God has ordained to change societies. I want upright legislators and leaders, but if the Gospel is not the focal point of the energy of Christians we will share the largest part of the blame for the disintegration of North American culture (Matthew 5:13-16).

See People through God’s Eyes – I think a less angry, less shrill, less paranoid perspective of our fellow human being would be extraordinarily helpful. It is easy to have a hateful attitude toward people who don’t share our worldview and our faith, but where in Scripture are we given permission to think and act that way? And what is the good in that? The truth about me is that I was a wreck of a person before God’s grace found me, and I still struggle and fail and have absolutely no right to look at anyone else’s failures as being more scandalous or wretched than mine. We are all in the same messed up situation–that is not to minimize sin, or to deny it’s severity–just to say that I don’t belong to God by my right but by His mercy!

Share hope – I woke up today, November 7, 2012 with hope, because God is Great and greatly to be praised (Psalm 48:1)! I woke up determined to have my life count for a great purpose because God is a great God! I woke up today convinced that America’s greatness has more to do with the faithfulness of me and all the other Christians I know and churches they are part of and our obedience to God and commitment to the truth of Gospel than what transpired in the presidential election.